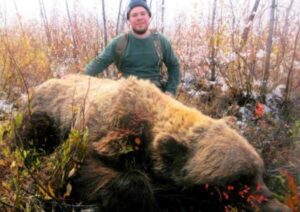 Larry Fitzgerald and a pal were moose hunting near Fairbanks, Alaska, when they came across fresh bear tracks in the snow. Three hours later, the auto body man had taken down the grizzly that left the prints, an enormous bruin that stood nearly 9 feet tall and earned Fitzgerald a place in the record books. [Read More]